13.15
0.110 (0.84%)
Tiempo Real
Mercado Abierto
13.15
Blockchain Technology: Enabling A Decentralized Future
27 Abril 2022 - 04:24AM
NEWSBTC
What started as a distributed digital ledger enabling a peer-to-peer network has now become a whole new dimension of the internet. Blockchain, the underlying technology of cryptocurrencies, evolved in an immense way over the last ten years. Bitcoin is its first real use case, and it is now recognized as a global monetary network with a fixed supply that several countries have accepted as legal tender. Yet, blockchain’s functionality doesn’t end with Bitcoin. There are many prominent use-cases of blockchain technology that helped the crypto market accrue over $1.8 trillion in market cap. That too, despite little or no attention and participation in the early days of growth. The Scope of Blockchain-Powered Disruption Blockchain technology will be a disruptive force across industries. For example, it can transform the venture capital industry, reshaping how companies raise money with the help of tokenization. This in turn will help companies increase capital efficiency exponentially while enabling decentralization. Security Token Offerings (STOs) are a working use case in this regard. With STOs, startups can freely distribute tokens in the form of equity and raise capital in an adequately regulated manner. Gaming is another prominent industry that blockchain disrupts. GameFi is emerging as the next era in gaming and entertainment, innovating in-game assets and NFTs. Thus, gamers have access to unprecedented revenue streams, which is substantiated by the immense popularity of Play-to-Earn (P2E) games. Moreover, unlike traditional video games, blockchain gaming enables players to retain asset ownership and derive value in open marketplaces. NFTs are critical to GameFi. But even beyond that, they facilitate several use cases, including those in digital art and entertainment. Moreover, DAOs or exclusive communities use NFTs to determine whitelists and for access control. Emerging artists and creators also use NFTs to tap into their fan bases and generate considerable revenue compared to what they are making on Web2 platforms. Having said that, however, blockchain has a bigger purpose overall. It solves the problems of fragmented monetary systems with digital assets. Stablecoin is one prominent example of such an asset that also addresses the volatility of ordinary cryptocurrencies. Since stablecoins are pegged to the value of some underlying fiat or cryptocurrency, they maintain a ‘stable’ price and become relevant for day-to-day transactions. This also makes stablecoins key to blockchain’s mass adoption, especially for cheaper and faster cross-border payments. Unlocking Blockchain’s Full Potential Blockchain disrupts existing industries in many ways. But for the technology to achieve its full potential, there’s a need for solutions that boost interoperability and cross-chain functionalities. Progress is already being made on this front, because of platforms like Konstellation Network. Built with the Cosmos SDK, Konstellation caters to the expanding decentralized capital markets through its cross-chain infrastructure. It strives to make asset management more seamless for users by operating under one umbrella. In doing so, Konstellation has integrated VegaX, an ASM known for its crypto investment products. Users thus have access to the index strategies of VegaX that can improve overall returns in DeFi. Moreover, the platform has a separate set of portfolio management tools, available on Taebit—a South Korean DeFi platform simplifying crypto investing and staking. Konstellation also gives investors exposure to the metaverse through the Solana-based NFT game, Squid Squad OG, and an integrated marketplace, Kambrian. People who own a part of this collection can earn high rewards by playing a simple game of rock, paper, and scissors. Furthermore, Konstellation recently went a step further to promote blockchain-oriented innovation by launching an incentive pool in collaboration with Osmosis Zone. The pool initially held 10 million $DARC — Konstellation’s native token — and has two equal sub-pools paired with $ATOM and $OSMO. This strategic partnership also sheds light on the significance of Cosmos as a whole, when it comes to shaping the future of blockchain. Towards Mass Adoption Besides strengthening decentralized capital markets, projects like Konstellation significantly enhance blockchain’s value proposition for individuals and institutions alike. They unlock cross-chain liquidity, which prepares the ground for scalable and sustainable markets. In turn, this initiates a positive feedback loop—innovation boosts adoption and adoption encourages innovation. As more sectors implement blockchain, the closer the world will get to Web3.
Cosmos Atom (COIN:ATOMUSD)
Gráfica de Acción Histórica
De Dic 2022 a Ene 2023 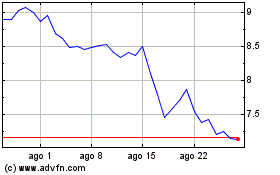 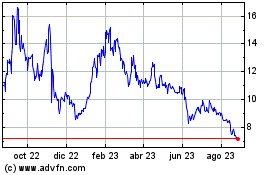 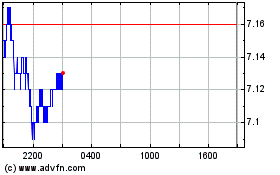