0.999
-0.001 (-0.10%)
Tiempo Real
Mercado Abierto
0.999
XRP Wins Again: Bullish Rally Sees It Climb to Sixth Spot by Market Cap
20 Julio 2022 - 02:44PM
NEWSBTC
On CoinMarketCap, XRP has risen to sixth place as of today, July 20, with a market value of $17.63 billion. Being able to exceed not just Binance USD but also Cardano and Solana is a noteworthy accomplishment for Ripple’s native currency. Ripple’s native token, XRP, provides a means of payment settlement between banks and digital assets exchanges. It decreases the number of extra steps needed when transferring money internationally, which leads to lower fees. Related Reading | Solana And Avalanche Poised For Gains As Crypto Market Enjoys New Tailwinds However, by breaking through significant resistance, XRP overtakes Binance USD’s market cap and gains the upper hand by 8%. The primary factor contributing to XRP’s placement in sixth place is the coin’s weekly price increase of more than 21%. There is much more to be done for the battle between Binance USD and Ripple. However, both are still trying very hard to make headway which, under the right conditions, could lead to them taking fifth or fourth place- or even third and second place- in addition to keeping their original standings of sixth and seventh. Following news updates on the SEC v. Ripple lawsuit, the more optimistic investor attitude led to an increase in the coin’s price. Fans and developers of Ripple are now closely following the U.S. SEC’s continuing lawsuit against the business, which appears to be interesting, according to the most recent news. Analysis Of Ripple (XRP) Struggles to Regain its Value In terms of the lifespan of cryptocurrency, Ripple is one of the longest. When it was first introduced in 2012, it frequently traded for less than $0.10. However, when the crypto market experienced a boom in late 2017 and early 2018. XRP was one of them which gained much from this boom and recorded its all-time high on January 4, 2018, at $3.84. The coin soon started to decline, and by the end of 2018, it was only worth $0.50. By then, XRP’s value continued to decline. The coin was in the early stages of a bull run that ended on April 14, 2021, when it touched an average high of $1.96.  Since the beginning of September 2021, the sixth-largest coin has struggled, dropping more than half of its value, while dozens of other cryptocurrencies have collapsed in this period. The situation worsened in January 2022 when a sluggish cryptocurrency market caused XRP to end the month at $0.6191. Following that, it fell even further, reaching $0.345 on May 12 due to the market turbulence caused by the de-pegging of the TerraUSD stablecoin and the demise of LUNA. Related Reading | Why Bitcoin Must Beat $25,500 To Establish A Bull Rally It was valued at about $0.40 on June 10. Following that, the cancellation of withdrawals by the cryptocurrency lending firm Celsius confirmed that the cryptocurrency market is in a bear market, and on June 18, it dropped to $0.2906. However, it has already bounced back from its June low and is presently trading at $0.366650, up 12.6% in 14 days. In addition, the Finder’s panel forecasts that the price of Ripple (XRP) will increase by almost 260 % in 2022 and reach $2.55 this year at the end of December. Featured image from Flickr, chart from Tradingview.com
Binance USD (COIN:BUSDUSD)
Gráfica de Acción Histórica
De Nov 2022 a Dic 2022 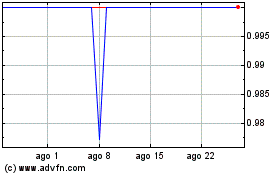 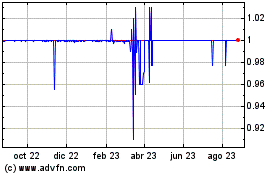 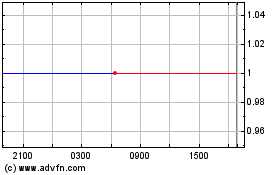