1.16
0.00 (0.00%)
Tiempo Real
Mercado Abierto
1.16
CoinEx 4th Anniversary｜Meet the CoinEx Team in the United States
06 Enero 2022 - 02:04AM
NEWSBTC
On the 4th anniversary of the exchange in December 2021, CoinEx launched the “Meet the CoinEx Team” anniversary celebration together with its global Ambassadors as a gesture to thank and give back to users. On December 21, 2021 (UTC), on behalf of the exchange, CoinEx’s US Partner Devis Maxhari hosted a “Meet the CoinEx Team” meet-up to celebrate the exchange’s 4th anniversary. Ever since its inception, CoinEx has always valued interactions with users. This meet-up brought users and the exchange closer through videos, and CoinEx’s US team also reached out to the local users face to face during this wonderful offline event. At the meet-up, CoinEx’s US Partner Devis Maxhari hosted entertaining Q&A sessions about CoinEx and CET and allowed the local users to learn more about the exchange through games. The winning users received anniversary gifts, including branded goods like official CoinEx shirts. Over the past four years, CoinEx has earned the trust and recognition of local users in the United States through joint efforts made by the exchange and the local team. The anniversary celebration also brought CoinEx closer to the local users while allowing the exchange to better understand their needs. Moreover, the meet-up also improved the exchange’s local image and recognition, and impressed the local users with its mission of “making the world a better place through blockchain”. CoinEx’s global presence is inseparable from the support and trust of partners and users in the states. The anniversary meet-up not only showed that the CoinEx is well received among local users but also conveyed CoinEx’s gratitude towards its US Ambassadors and users. The solid progress of the exchange is backed by joint efforts made by CoinEx and its users around the world. In the future, CoinEx will keep offering more user-friendly, more stable trading environments and services to its US users in a world filled with both opportunities and challenges. We look forward to meeting more users in the United States.
EOS (COIN:EOSUSD)
Gráfica de Acción Histórica
De Ago 2022 a Sep 2022 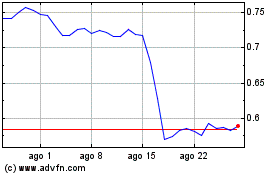 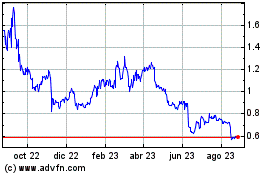 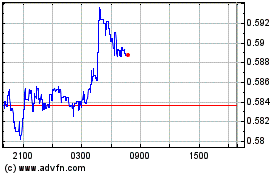