4.58
0.010 (0.22%)
Tiempo Real
Mercado Abierto
4.58
Filecoin (FIL) In Bearish Clutch, But May Easily Escape And Recover
07 Septiembre 2022 - 06:52AM
NEWSBTC
It isn’t easy to break free from a bear’s clutch, but Filecoin (FIL) has its ways. FIL price performing well despite the bearish grip Price retreats by 8.06% RSI, CMF showing selling edge and bearish behavior By putting a stop to the heightened selling activity, FIL was able to bounce back from the $5-mark. With that, the coin was able to make a successful comeback while still somewhat pinned down by the bears. With FIL going through the motion of its 20/50/200 EMA, it shows a somewhat consistently slow trend or movement that could happen in the next few sessions. Now, if FIL won’t manage to hang on to the $5 baseline, the altcoin may likely be pulled further down. According to CoinMarketCap, FIL price is trading at $5.70 or showing an 8.06% decline as of this writing. Related Reading: Want to Hodl USDC? Check These Indicators First To Ease Doubt FIL Bulls Keen To Guard The Baseline Ever since FIL has capsized to its all-time low registered on June 18, the bulls are keen to guard the $5 baseline. A quick breach that went above $7.35 was definitely a come-on, especially with the bullish momentum but it was good while it lasted. Chart: TradingView.com On the flip side, the plunge that shoots under the 20 and 50 EMA has stirred a bullish invalidation seeing that the altcoin seems to facing some difficulty in breaching the five-week resistance zone. A bearish crossover of the above EMAs shows off the selling propensity of Filecoin. A dull region may be close to FIL’s POC or Point of Control as seen in the $5.6 zone. At this point, the FIL bulls will most likely gather enough strength to test the key resistance. The recovery efforts by the altcoin might face some challenges in the $6 to $7 range which could be evident in the next sessions. FIL Resilient Despite Bearish Grip RSI for Filecoin has shown a selling edge and slipped from its position that sits above the midline. CMF is also showing bearish streaks after it has closed below the zero range. Additionally, DMI lines were also shooting for a bearish crossover but Filecoin’s ADX continues to show a weak directional trend. With the breakout seen under the daily 20 and 50 EMAs plus the robustness depicted by the five-week key resistance, sellers could take this as a hint to place recovery barriers in the next sessions. More so, investors and traders should always take some cue on the BTC and ETH movement and how it impacts FIL and other altcoins as a while before making any move. FIL has always had an impressive track record. In fact, FIL had a spike of 2.74% seen on September 2 showing that the altcoin can hold its head despite from the bearish grip. Related Reading: Litecoin (LTC) Near-Term Route Could Be Determined By This Factor FIL total market cap at $1.4 billion on the daily chart | Source: TradingView.com Featured image from Invezz, chart from TradingView.com
Filecoin (COIN:FILUSD)
Gráfica de Acción Histórica
De Nov 2022 a Dic 2022 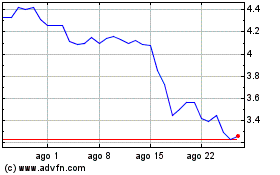 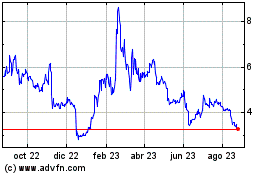 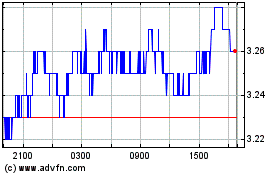