0.0951
-0.0016 (-1.65%)
Tiempo Real
Mercado Abierto
0.0951
Kraken Supports Ethereum 2.0 Clients Team Alongside Five DeFi Projects With A $250K Donation Each
28 Agosto 2021 - 05:00PM
NEWSBTC
Kraken and five other DeFi projects contribute $250,000 each to support the teams that work on the Ethereum upgrade. In addition, they donated the sum to the ETH Foundation to develop the network’s version 2.0. Open-source developer teams like Erigon, Besu, Nimbus, Geth, and Nethermind will join the ETH Foundation in the donation. 1/ A diverse execution-layer client ecosystem is at the heart of all that we’re building together. Today, we're excited to announce that @compoundgrants, @krakenfx, @LidoFinance, @synthetix_io, @graphprotocol & @Uniswap are donating $250K each to support #Ethereum client teams. — Ethereum (@ethereum) August 24, 2021 The Ethereum Foundation announced the source of the donations. They mentioned that the tips came from crypto exchange Kraken, Synthetix, the Graph, Compound Grants, and Uniswap Grants. Related Reading | Blockchain Startup In Pakistan Dubbed Bazaar Secures $30 Million In Funds The donations will add to the funds the Foundation provided earlier back the layer teams of ETH execution. The Funds Aim To Empower The Ethereum Team The Foundation of what we build together incudes the various client ecosystem of Ethereum. It consists of the consensus layer clients and the execution layer; both are vital aspects of future Ethereum mergers. The announcement also reads: “The donation sums up to $1.5 million and goes to open-source developer teams like Nimbus, Besu, Geth, Erigon, and Nethermind”. The developer team is to make provision for the network’s critical infrastructure to see the transition of ETH. The ETH is to transit to proof-of-stake mechanism from a proof of work. An August 24th post on the Ethereum web page reads: “In the heart of what we are developing together is a broad execution-layer client ecosystem. So today, we gladly announce that Kraken-fx, Uniswap, synthetix_io, graph-protocol, compound-grants, LidoFinance, and donates $250K each to support ETH 20 client teams.” ETH is trading in a sideways momentum on the daily chart | Source: ETHUSD on TradingView.com Jesse Powel, the co-founder and CEO of Kraken, says that the company is proud to give back to valiant builders who work hard on cutting-edge crypto innovation. Kraken proposed that the exchange users would have staked up to 800,000 ETH in Eth2 by July. This is worth about $2.5 billion with current prices. The network platform had given out 25,300ETH as rewards emerging from staking when it started initially. Related Reading | Kraken To Re-Enter The European Market By Applying For A New License This project portrays an effort to ensure the security of Ethereum’s consistent growth and decentralization. Each of the elements is exemplified by the diversity of clients, our belief in Ethereum’s continued success, and the strength of the teams. The announcement revealed. Etherscan Reports The ETH Improvement Proposal (EIP) 1559 upgrade was launched early this month. It introduces a burning mechanism as an aspect of its regulated gas fee structure. According to Etherscan data, about 4.85 ETH worth almost $15,300 are burned every minute as of writing. Over 70,000 Ethereum (ETH) has been burned or removed from the network’s circulation. Etherscan is a Block Explorer and Analytics Platform for Ethereum, a decentralized smart contracts platform. As of August 12, 31,792.48 ETH has been burned via Etherscan, amounting to $99,871,306.11. Featured image from Pixabay, chart from TradingView.com
Graph Token (COIN:GRTUSD)
Gráfica de Acción Histórica
De Sep 2022 a Oct 2022 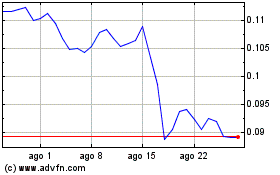 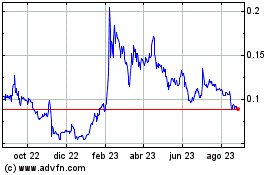 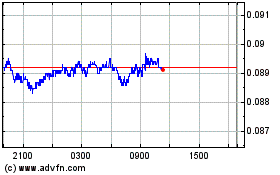