2.26
0.040 (1.80%)
Tiempo Real
Mercado Abierto
2.26
TerraLabs Sold Over 80,000 BTC To Rescue Its Stablecoin, Luna
18 Mayo 2022 - 07:00AM
NEWSBTC
The crypto market has experienced many bloodbaths in the past. But last week’s crash had more catastrophic effects on the market than recent bearish trends, mainly on the stablecoins. UST, a stablecoin issued by Terraform Labs, is an example that stunned the crypto world as the coin collapsed and dropped its value from $1 to $0.15 between May 9 to May 14, nearly losing 85% of its value. Afterward, on May 16, the Luna Foundation Guard (LFG) announced on Twitter that they had sold out their Bitcoin (BTC) reserves between May 8 to 10 to rescue its stablecoin. Related Reading | Bitcoin Marks Seven Consecutive Red Candles, Paints Gruesome Picture For Market It was not the first time a crypto project collapsed. But the previous collapse had not the terrible effects as the stablecoin UST has suffered in the most recent bloodbath. LFG, an organization aimed at supporting the blockchain innovators developing a decentralized economy, revealed its reserves of 80,394 BTC and other digital currencies it held as of May 07, 2022. The Foundation reportedly began converting its assets into reserves against UST on May 8, 2018, when UST’s price fell significantly. It took these steps immediately since it is a non-profit firm with a primary motto to strengthen Terra’s ecosystem.  Similarly, the firm explained it quickly shifted the asset by transferring the digital assets to a counterparty, which does not require short notice to allow large-sized transactions. LFG Strives To Maintain Luna Peg In line with the Master Services Agreement that was inked on January 10, 2022, TerraForm Labs (TFL), on May 10, said it managed to execute all financial, administrative, and operational duties that were needed to back its coin when the value of Terra’s $UST had decreased to $0.75. In its desperate attempt to maintain the value of the peg, TerraLabs, relying on the LFG, had carried out the following BTC exchange besides others. “LFG sold 33,206 $BTC for an aggregate 1,164,018,521 $UST.” Speaking about the remaining 313 BTC in circulation, the Luna Foundation has announced that it plans to distribute them among Terra’s community to reimburse affected users. The LFG revealed in a tweet; The Foundation is looking to use its remaining assets to compensate remaining users of $UST, smallest holders first. We are still debating through various distribution methods; updates to follow soon. Suffering the effect of collapse, the Luna made the deepest dive on Saturday when it sniffed the bottom. Afterward, the volatile token skyrocketed and gained a whopping $720% in just 24 hours, reaching its value at $0.00040154. Likewise, Luna’s trading volume surged 1000% after the TFL restarted its block production after a 9-hour halt. Related Reading | Ripple (XRP) Price Picks Up As SEC Legal Showdown Drags On As things stand now, it’s hard to speculate whether or not the Terra network can recover from such a huge loss. But, the recent gains give frustrated investors momentary ease. And it remains to see whether the token will have the potential for full-fledged recovery. Featured image from Pixabay and chart from TradingView.com
Terra (COIN:LUNAUSD)
Gráfica de Acción Histórica
De May 2022 a Jun 2022 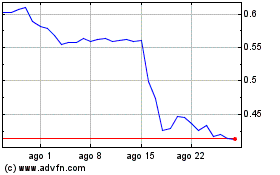 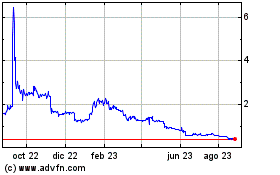 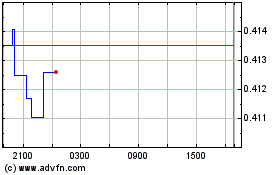