0.7436
-0.0368 (-4.72%)
Tiempo Real
Mercado Abierto
0.7436
The Metaverse; A Likely Winner in the Development of Tomorrows’ Digital Ecosystem
25 Julio 2022 - 09:58AM
NEWSBTC
The Metaverse will likely grow into a $1 trillion market according to a November 2021 report by Grayscale. With barely two years since the concept gained popularity, virtual worlds have become common amongst crypto natives, celebrities and big tech corporations, including Meta and Microsoft. Today, this nascent crypto ecosystem is touted as one of the promising niches, combining the power of Artificial Intelligence (AI), Virtual Reality (VR) and Blockchain. So, what exactly is driving adoption in the metaverse? First and foremost, blockchain-oriented virtual worlds are perhaps the closest we are to unlocking the possibilities of Web 3.0, also referred to as the decentralized web. In this new paradigm of the internet, users will have the autonomy of control, enabling them to vote on critical developments based on an incentivized economy model. More importantly, the metaverse enriches the Web 3.0 experience by introducing a way for people/institutions to replicate real-world activities in a virtual world. A concept that will provide enormous opportunities for advanced interactions in modern-day work settings or casual events. Imagine a virtual world where one can move around as an Avatar or acquire property to develop and host virtual events, that’s the idea of the metaverse. “When we talk about the metaverse, we’re describing both a new platform and a new application type, similar to how we talked about the web and websites in the early ’90s. It’s no longer just playing a game with friends. You can be in the game with them.” explained Microsoft’s CEO Satya Nadella during a keynote address. A New Paradigm of Digital Interactions The world of technological innovations is ever changing, from the yahoo era to Web 2.0 and now the much anticipated decentralized web. Is it possible that future netizens will exist within virtual cities? From the look of things, it seems that globalization is not only a matter of connecting economies but also bridging the gap in social interactions. Well, the metaverse is gradually proving to be a perfect vehicle for the latter. What started with the debut of Non-fungible token (NFT) infrastructures has paved the way for development of virtual worlds such as Decentraland and The Sandbox. These two ecosystems were the pioneer metaverse platforms to launch and now host some of the most expensive virtual land parcels. In one instance, an investor parted ways with $450,000 just to acquire a piece of property next to Snoop Dogg on The Sandbox. While such an investment may not add up to most people in today’s world, it is certainly making sense to celebrities and creatives. To this end, we have more advanced metaverse ecosystems such as CEEK which mainly focuses on adding value to the creator economy. The project recently launched an exclusive land sale, featuring 10,000 parcels of land where the owners (creatives and celebrities) can host virtual events or showcase their work. “This is the first step to launch the first truly community-owned metaverse where creators get a meaningful share of their hard work.” noted Mary Spio, CEO of CEEK. For a long time, this has not been the case, celebrities and artists have often been limited by geographical boundaries. Additionally, Web 2.0 service platforms end up taking the lion’s share of a creator’s revenue when disseminated through channels such as Instagram, Facebook and Twitter. With the arrival of the metaverse, tides will gradually change in favour of the creators; no wonder tech giants are also trying to capture a share of this growing market. “Our hope is that within the next decade, the metaverse will reach a billion people, host hundreds of billions of dollars of digital commerce, and support jobs for millions of creators and developers.” said Mark Zuckerberg in Meta’s 2021 Founder’s letter. Looking Into the Horizon As it stands, it might be too early to predict which direction the metaverse will take. Is it going to be built by centralized intermediaries or on decentralized blockchains like Ethereum? The perfect scenario would be a combined effort to create interoperable worlds but only time can reveal what the future holds. That said, one thing is almost certain; we are heading to an era where people will be living inside computers.
Decentraland (COIN:MANAUSD)
Gráfica de Acción Histórica
De Ene 2023 a Feb 2023 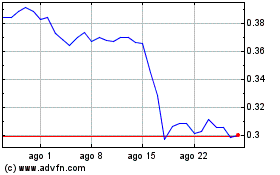 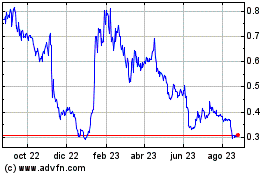 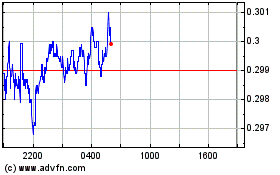