0.303799
0.000199 (0.07%)
Tiempo Real
Mercado Abierto
0.303799
Valkyrie Crypto Trusts Gather Nearly $74 Million In Funding Amid Bear Market
16 Septiembre 2022 - 03:48PM
NEWSBTC
An alternative investment company, Valkyrie, has added $73.6 million in capital into two crypto-focused trust funds. Valkyrie initially had $1.2 billion in assets under management at the end of the second quarter. This information is in amended filings with the United States Securities and Exchange Commission (SEC). Over the years, crypto investments and Decentralized finance have proven to be a great alternative to the traditional finance system. It could be because DeFi has a way to boycott the bureaucracy in the financial system. Decentralized Finance (DeFi) allows the use of digital ledger technologies. Digital technology enables investors to access and control their assets and financial data in global financial transactions. Related Reading: WATCH: Ethereum Merge Sell The News Event | ETHUSD September 15, 2022 With DeFi, developers have created financial instruments that can operate digital assets without limitations. Loan collateral and debt obligations can all be tokenized with Decentralized Finance. Since blockchain technologies are transparent and accessible, many investors now channel their finance into the Crypto industry. As a result, traditional finance keeps flowing into the crypto industry, even with the bear market. Details Of The Valkyrie Tron Trust According to reports, the oldest fund was launched in 2021. The Valkyrie Tron Trust offers eligible investors access to the TRX cryptocurrency. According to the SEC filings, the trust has raised $50 million from a small sum of $57 in sales in July 2021. Tron is a blockchain-based decentralized digital platform with its cryptocurrency known as TRX. It aims to host entertainment applications and enable content creators to sell their work directly to consumers. Tron has been increasingly gaining recognition in the crypto market recently. A spokesman of Valkyrie noted that Investors are taking note of the continuous transaction growth recorded recently by the Tron network. Valkyrie Avalanche Trust Increased AVAX Exposure Meanwhile, the Valkyrie Avalanche Trust is bringing exposure to the AVAX token. The trust appeared in an SEC filing in January, but no sale has been recorded. The trust has raised $24 million out of the $25 million target mentioned by Valkyrie in May. Valkyrie’s Spokesperson commented that the Avalanche adoption rate is increasing significantly. He referred to KKR’s deal with Securitize for tokenization of a private equity fund on Avalanche blockchain announced earlier this week. A Brief On Valkyrie Valkyrie is a Tennessee-based investment company. The company offers trust funds based on eight protocols, three Nasdaq-listed exchange-traded funds (ETFs), Decentralized finance (DeFi), and protocol treasury business management. The SEC approved Valkyries’ XBTO Bitcoin Futures Fund in May. The crypto investment firm announced plans to enter into venture capital with a $30 million fund two months after the approval. The fund’s targets are new start-up companies in Israel. Valkyrie’s customer base is mainly from the U.S, and this may help assist the Israeli teams. Related Reading: WATCH: Bitcoin Bear Market Corrective Patterns Examined | BTCUSD September 14, 2022 Valkyrie also closed a deal of an $11 million strategic funding round in July. Top traditional finance companies BNY Mellon and Wedbush are backing the fund. Featured image from Pixabay, Charts from TradingView.com
MIS (COIN:MISSUSD)
Gráfica de Acción Histórica
De Dic 2022 a Ene 2023 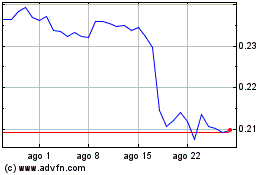 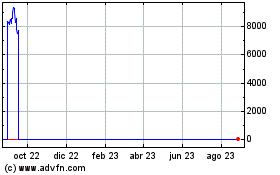 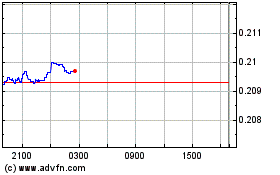