645.12
6.29 (0.98%)
Tiempo Real
Mercado Abierto
645.12
Ripple Outperforming Almost The Whole Market, What’s Pumping XRP Price?
24 Septiembre 2022 - 05:18PM
NEWSBTC
The currency of the blockchain-powered online payment platform, XRP, has gained almost 60% in the past week. After briefly dipping to $0.34 five days ago, the token climbed back and traded around $0.52 this morning. Crypto influencer Ben Armstrong claims to know the reason behind this continuous climb amid the current general crypto bear market. The multiple-crypto holder shared his two cents about the state of events with his 800k plus followers on Twitter yesterday. Related Reading: Maker DAO Shows Bullish Sentiment After A While, Eyes $800? Influencer Believes Impending Close To Ripple-SEC Case Is Responsible According to Armstrong, multiple factors are causing Ripple’s insane price surge. However, he can confidently trace one primary reason to the ongoing SEC court battle with the sixth strongest crypto. The influencer tweeted that SEC has given up on its 2-year struggle of trying to prove XRP is a security. As of this week, the Ripple community “can be pretty confident the worst-case scenario is a fine,” the tweet reads. The last weekend saw both parties in the ongoing case filing for summary judgment. In other words, Ripple and SEC believe enough evidence has been provided for a verdict outside a court case. They wait for Judge Torres’ decision supporting one side or the other based on already available evidence. A court battle that started way over in 2020 might soon be coming to an end. Ripple And XRP Community Expect A Favorable Verdict Like Ben Armstrong, the Ripple community and Ripple Labs are expectant of a favorable ruling. If that happens, XRP will not be considered a Security but a digital asset, just as Ripple intended.  Another crypto influencer predicted that if this happens, it will be the needed boost the bearish crypto market needs. David Gokhshtein tweeted that the crypto market will go parabolic should XRP win this case. He and Brad Garlinghouse, Ripple’s CEO, believe a win for XRP would stamp cryptos stand with regulation. Consequently, it would increase investors’ faith in the ailing asset. Whale Movements On XRP Blockchain Also Partially Responsible For Price Boost Another reason for the surge in XRP seems to be whale movements on the platform. On-chain analytics firm, Sentiment data reveal an increase in whale transactions on the Ripple blockchain.  Furthermore, the Whale Alert crypto tracker revealed multiple anonymous transfers of significant amounts of XRP in the past week. Data showed that a 261 million XRP transfer and another 582 million XRP transaction took place. Ripple was involved in both transactions, moving 80,000,000 of the tokens externally. In total, close to a billion tokens exchanged hands in whale transactions last week.  Related Reading: Can WAVES Flow Back From Its Low Ebb And Reclaim $4.6? These two factors mentioned above are mainly responsible for the continuous climb of XRP tokens over the last week. One can only wait to see if the XRP community’s optimism is indeed rightly placed and that ripple will indeed win the case. At the time of writing, XRP is currently trading around $0.48 after briefly testing $0.52 earlier today per Coinmarketcap data.  Featured image from Pixabay and chart from TradingView.com
Maker (COIN:MKRUSD)
Gráfica de Acción Histórica
De Oct 2022 a Nov 2022 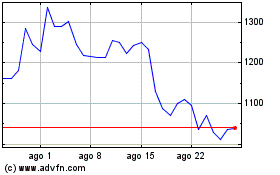 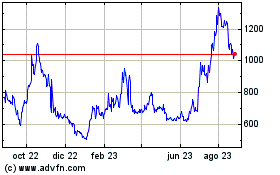 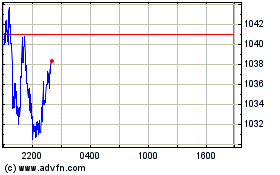