0.001279
-0.00000473 (-0.37%)
Tiempo Real
Mercado Abierto
0.001279
Bitcoin Is An alternative To Economic Condition, Says CEO Of Franklin
12 Agosto 2022 - 04:00PM
NEWSBTC
Many people are reacting differently to the current condition of Bitcoin and the global economy. In the past two consecutive quarters, the US has posted negative GDP, leading to a rate spike by the Feds. Though some individuals are stating that there is yet no inflation, its impact is gradually manifesting. The President and CEO of Franklin Templeton, Jenny Johnson, has aired view on the current global economic condition. Johnson stated that while the financial condition is in a sad state, Bitcoin remains its best distraction. CEO Johnson related her opinions during a recent interview. She mentioned that the prevailing economic situation is acting as a disruption. Related Reading: Will Ethereum Breach $2,000 Before The Merge? In her terms, it’s the best to happen to financial providers at the moment. Though several see Bitcoin as digital gold and an asset that could create a hedge against inflation, Johnson has a different stance. To her, BTC is just consumers’ distraction from all prevailing financial problems. Also, the CEO has no belief that governments could make Bitcoin a dominant asset for foreign exchange. She said that it was beyond typical confidence for that to happen as numerous arguments would erupt. When it comes to blockchain technology, the CEO has an impressive option concerning that. She called it the sports change, stating that it will bring a positive difference possibly to all industries. Johnson maintained that Franklin Templeton still offers cryptocurrency services to its clients. Also, the company is not planning to stop such service options now. Franklin Templeton is an American multinational holding firm. It boasts several subsidiaries. It functions as a global investment company and was founded in 1947 in New York City. Global Destructive Outplay But Bitcoin Gained Momentum Over the past few years, the entire global system had a devastating impact from the spread of COVID-19. This remained one of the great world pandemics that claimed millions of people from different countries. With the invasion and effect of the pandemic came a distortion in various aspects of life, especially social life. The overall impact on the financial system was quite massive. Related Reading: Market Sentiment Shoots Up As Bitcoin Eyes $25,000 To maintain the float of the economy during the crisis, some countries central banks, especially the US Federal Reserve, printed more fiat currency. However, such a process is taking a negative pull after two years. The world is generally battling a rising inflation rate with other factors. Russia and its president, Vladimir Putin, received the blame from the Western world, pioneered by the US. They further cut off financial connections with Russia. Also, Russia has taken the top as the most sanctioned country globally. But Russia decided to make its retribute by stopping gas deliveries to some European states. Most of the states have no alternative source and have become stranded. This action conversely hiked electricity costs, leading to an increase in price for all goods. The entire outplay of events is becoming more destructive. Featured image from Pixabay, chart from TradingView.com
ECOMI (COIN:OMIUSD)
Gráfica de Acción Histórica
De Ago 2022 a Sep 2022 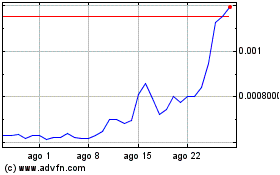 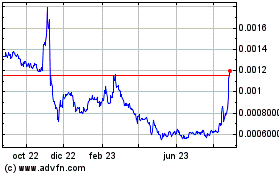 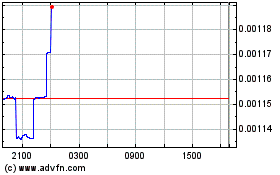