1.31
0.00 (0.00%)
Tiempo Real
Mercado Abierto
1.31
Bitcoin Slides Under $20K – Another Collapse In The Offing?
30 Junio 2022 - 07:26AM
NEWSBTC
Some parts of the virtual stratosphere are again rife with photos of the Titanic sinking. For those in the know, obviously, that alludes to what has befallen Bitcoin these days. There was supposed to be a good ounce of jubilation in recent days when the world’s most popular crypto showed signs of renewed vigor and reclaim a price level that would have eased the fears of many but, nope. Suggested Reading | Ethereum (ETH) Hammered Down To $950 As Crypto Selloff Deepens June Not A Good Month For Bitcoin According to data from Coingecko, Bitcoin fell below $20,000 on Thursday, to $19,112, a drop of 4.5 percent over the previous week. The most popular cryptocurrency fell below $20,000 for the third time in as many weeks, extending the crypto market’s June slump to the very end of the month. The price of Bitcoin has reached a consolidation period and its downward trend appears to have halted following a major shakeout to $17,000. This area is likely to provide substantial support, since it encompasses the 2017 all-time high, and it might trigger a short-term recovery to the $30,000 zone. Multiple variables contribute to Bitcoin’s price fluctuations, and as long as these factors persist, this unpredictability and price variation will persist. Three Arrows Collapse Hit Bitcoin Popular Defi tokens such as Solana and Avalanche fell more than Bitcoin as fears of contagion grew in the wake of the failure of the hedge fund Three Arrows Capital. Prior to this month, the price of BTC has fallen below $20,000 at least three times: Tuesday evening, Thursday morning, and two weeks ago, when the most sought-after cryptocurrency asset broke the heavily-monitored threshold after fluctuating below $25,000 for five days. BTC total market cap at $364 billion on the daily chart | Source: TradingView.com Bitcoin’s reasonably stable trading after hitting a low of $17,560 on June 18 spurred confidence that the damaged cryptocurrency market was preparing for a turnaround. Deutsche Bank Is Bullish Nevertheless, the sector remains under pressure because of the central banks’ efforts to drain liquidity and a succession of high-profile cryptocurrency collapses that have eroded investor trust. The crypto market is drastically different from its position at the end of 2020. On December 16 of that year, $20,000 set a record high. At the beginning of this year, an 11 percent decline in Bitcoin’s value to $42,000 was referred to as a “bloodbath week.” Despite Bitcoin’s price decline of roughly 60 percent over the previous 90 days – and in the wake of this downturn – Deutsche Bank’s analysis indicates that BTC’s price might still achieve a 30 percent rally above its present level by the end of the year. Suggested Reading | Sandbox (SAND) Blows Up 20% Over Last 24 Hours Following ‘Takeover’ Rumors Featured image Fast Company, chart from TradingView.com
Sandbox (COIN:SANDUSD)
Gráfica de Acción Histórica
De Jul 2022 a Ago 2022 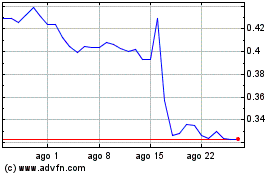 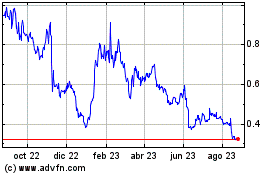 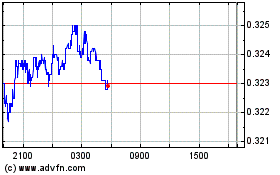