0.813
0.032 (4.10%)
Tiempo Real
Mercado Abierto
0.813
Monero (XMR) Readies For A Breakout As It Touches Important Milestone
07 Febrero 2022 - 11:00AM
NEWSBTC
Privacy coin Monero (XMR) usually spends its time in the shadows, which is exactly the way its community likes it. Till date, it is still impossible to penetrate the privacy that the digital asset offers, making it the go-to choice for investors who are trying to keep their crypto transactions and holdings a secret. Recently though, the cryptocurrency is breaking out onto the radars of more investors as it shatters an important milestone. As more crypto users are discovering their transactions are not as hidden as they might have thought, they are moving towards coins like Monero that offers the privacy they desire. This has seen the number of users rise on the blockchain and total transactions carried out has soared, more than doubling in just the first quarter of 2022. Monero (XMR) Surpasses 20 Million Transactions Monero is no doubt the leading privacy coin in the crypto space and it has once again proven this with its recent milestone. The coin seems to have exploded in popularity in just the first two months of 2022 as the number of transactions carried out has doubled from 2021. Last year, the number of transactions recorded was sitting at 8.65 million. With less than two months into the new year, the volume of transactions tells a new story. Related Reading | Bitcoin Hits Two-week High Imitating The Stock Rally Growing almost 150% in just a matter of months, the number of Monero transactions has crossed 20 million. Data from Blockchair shows that there have been a total of 2,554,175 blocks mined over the lifetime of the privacy digital asset, landing on more than 20,023,000 transactions carried out in the same time period. This number is important for a digital asset like Monero whose sole utility is being untraceable. It spells more usage from crypto users as they move towards keeping their crypto footprints hidden. It also points towards more adoption of the coin, and as the market rises out of the ashes of the last burn, it may mean significant growth for the digital asset in relation to price. Growing With The Market Like most cryptocurrencies, the price of Monero (XMR) had suffered when the market had crashed. This saw the cryptocurrency crashing from its high of almost $525 to the low $140, around which its value has trended for the past week. However, with the recent market recovery going into last weekend, Monero has followed along and has posted a recovery, up 16% in the past 24 hours alone. Related Reading | Cryptocurrency Wallet Phantom Marks $1.2 Billion Valuation Amid Recent Funding Round This does not mean that the digital asset is out of the woods though. Sentiments around the cryptocurrency continues to skew greatly in the bearish territory, and sell signals continue to overpower the asset. According to data from Barchat, Monero’s sell indicators have taken hold with 88% pointing towards sell. The 50-day, 100-day, and 200-day MACD Oscillator also point towards sell. XMR recovers to $176 | Source: XMRUSD on TradingView.com On the short term though, the 20-day moving average has turned towards buy. Coupled with the increased adoption and growing volume recorded, this trend is expected to continue and drive the price of the digital asset up in its wake. With a strong close above $180 by end of day, next significant support will be at $200, at which point, bulls will be able to sink their claws firmly into the asset. Featured image from CoinJournal, chart from TradingView.com
Secret (COIN:SCRTUSD)
Gráfica de Acción Histórica
De Dic 2022 a Ene 2023 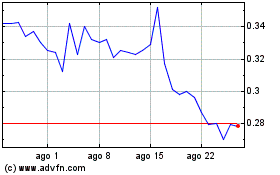 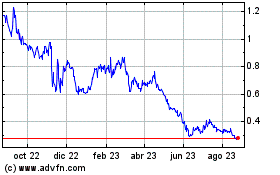 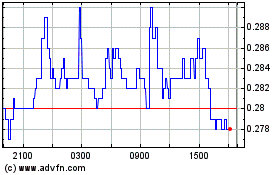