3.87
0.048009 (1.26%)
Tiempo Real
Mercado Abierto
3.87
LEO Token Pumps Post Bitfinex Bitcoin Seizure, But Why?
15 Febrero 2022 - 04:00PM
NEWSBTC
Bitfinex LEO Token has been rallying in the past week, as U.S. authorities allegedly captured the bad actors that took over 100,000 BTC from the platform back in 2016. LEO was created as a utility token as part of a mechanism to compensate the victims of the attack and repaid them for their losses. Related Reading | Meet The Two Alleged Bitfinex Hackers: Ilya Lichtenstein and Heather Morgan As of press time, the LEO Token trades at $6 with a 2.4% profit in the last day. On a 30-day basis, the token rallied from a low at $3.50 and reached a high of almost $8 as the news about the capture of Ilya Lichtenstein and Heather Morgan, the alleged hackers, became known. There has been a lot of speculation around whether U.S. authorities will return the stolen funds to Bitfinex. The funds are current value at over $3 billion and could fuel LEO’s burning mechanism, according to a recent report from Arcane Research. As explained on the LEO Token Whitepaper, iFinex, the parent company behind the crypto exchange, buys back the token on a monthly basis and proceeds to “burn them” by removing them from the market. The company acquires a portion of the token equal to a minimum of 27% of the consolidated gross revenues of iFinex, the document claims. In addition, the LEO Token can be burned if the funds seized in 2015 to their partner Crypto Capital, a payment processor, are returned. These were subject to a “partial government seizure” and Bitfinex has been working to release them since 2018. The other scenario to fuel an LEO Token burn is the crypto exchange recovers the Bitcoin stolen from them in the 2016 hack. At least 80% of the recovered funds will be used to repurchase and burn LEO within the subsequent 18 months from the date of the recovery, as the Whitepaper claims. Will LEO Token Continue To Record Profits? The market seems to be pricing-in this scenario and expecting more appreciation as a massive LEO Token burn could lead to a supply shock. However, traders must consider that iFinex and Bitfinex will attempt to prevent any sudden spike in the price of LEO. This period offers protection from sudden market spikes and will result in a VWAP. For example, a partial recovery of 60,000 BTC at the current market price (1 BTC = approximately $5,000), would bring in $300m. After deducting $30m (for the current outstanding RRTs), $270m would remain. Assuming that $270m was recovered net funds, iFinex would use at least 80% (i.e., at least $216m) to burn LEO tokens. Related Reading | Bitcoin Stolen From Bitfinex Hack Moved For The First Time In Five Years As Arcane Research noted, this buyback scenario was highly unexpected by market participants. As seen in the chart below, the LEO token saw a 57% discount to the BTC stolen funds back in October 2021, but now premiums have returned noting the sentiment shift amongst traders.
Bitfinex LEO Token (COIN:LEOUSD)
Gráfica de Acción Histórica
De Nov 2022 a Dic 2022 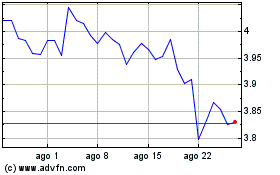 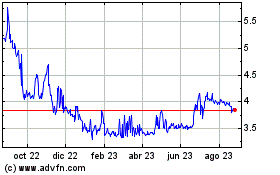 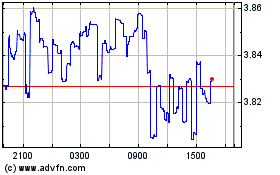