0.2208
-0.00734 (-3.22%)
Tiempo Real
Mercado Abierto
0.2208
STEPN (GMT) Holds Gains While Many Top Coins Taste Declines
28 Septiembre 2022 - 07:39PM
NEWSBTC
The GMT’s price has been in a strong upward trend in the past seven days despite other major coins nosediving. It experienced a 13% 7-day growth and a 24-hour gain of 0.53% this morning. Meanwhile, several top coins like FEI USD, Basic Attention Token (BAT), and Ravencoin have seen their prices plummet badly. STEPN (GMT) remains a major move-to-earn crypto project in the market despite fierce competition from the likes of SWEATCOIN. With a market cap of over $400 million, GMT is the 87th largest cryptocurrency by market capitalization on Coinmarketcap.  Related Reading: BIS Announces Successful Completion Of CBDC For Cross-border Transactions STEPN Pumps Thanks To GigaSpace Partnership The coin’s price has risen significantly over the past few days after it announced its partnership with GigaSpace metaverse. The partnership will see both companies building a STEPN virtual city for community members.  STEPN users can buy STEPN items, organize community events, and engage with others in the metaverse. It’ll have a sports theme and have buildings and amenities, including stadiums, shopping malls, and communal space. After the announcement on GigaSpace’s official Twitter handle, the coin price doubled within 24 hours. This was followed by a steady weekly rise from $0.59 on the 21st to $0.73 yesterday. Meanwhile, other top coins were all down between -5% and -10%. Surviving Amidst Competitors And General Bearish Sentiments STEPN (GMT) has enjoyed a good run since its inception in 2021. Over 4.72 million people have downloaded the app, attracting $5 million in financing and one million active daily users. But in recent weeks, the GMT price exhibited a significant negative trend as Stepn activity showed symptoms of slowing. Sweatcoin’s rise in popularity coincided with its decline. On September 13th, Sweatcoin released its own cryptocurrency, SWEAT. CoinMarketCap reported that the price of SWEAT increased by over 30% in the 24 hours following the launch. As a result, it’s likely that the introduction triggered the GMT price struggle as investors rushed to purchase SWEAT. GMT had also struggled alongside the entire crypto market. On April 29, 2022, it climbed to an all-time high of $3.80. But by the middle of June 2022, it dropped to its all-time low of$0.58, plummeting even more sharply than GST, its sister token. GMT Price Predictions Despite these bearish sentiments, GMT has managed to hold onto its position this week. It closed with a 10% increase two days back at $0.684746.  The trading volume over the last 24 hours totaled $265,743,486, with a current price of $0.6719. STEPN lost 0.39% in the past day, ranking #87 on CoinMarketCap with a $400,997,811 market cap. There are a total of 600,000,000 GMT coins in circulation and a maximum of 6,000,000,000 GMT coins available. Related Reading: Is Short Bitcoin ETF Exposure Gearing Up For A Squeeze? STEPN may find support at $0.5964 after bouncing to $0.8070, which is now its resistance. If the GMT price manages a strong breach over $0.8070, it might go to $0.9215 or $1.1170.  Featured image from Pixabay and chart from TradingView.com
Basic Attention Token (COIN:BATUSD)
Gráfica de Acción Histórica
De Oct 2022 a Nov 2022 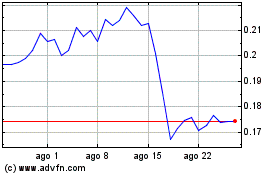 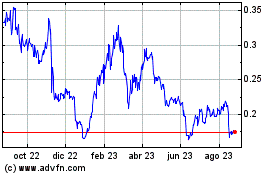 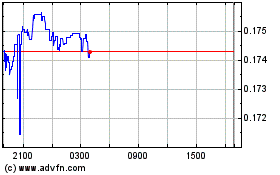