289.91
1.90 (0.66%)
Tiempo Real
Mercado Abierto
289.91
Ethereum Price Faces Sell Off, How Far Is The Correction Going To Go?
27 Agosto 2022 - 08:00PM
NEWSBTC
Ethereum price registered a fresh decline on its chart over the last 24 hours. The altcoin declined by 7% over the past day. In the last week, ETH fell by 9% and started to trade below the support level of $1,520. The broader market weakness could be blamed for most major altcoin’s southward movement on their respective charts. Ethereum price was trying to hold itself above its immediate resistance, the altcoin met with a significant sell-off. Technical outlook for the coin also pointed towards bearish strength. Buyers exited the market as soon as ETH failed to defend the immediate support level. ETH might continue to fall on the chart if the coin doesn’t manage to trade above the $1,400 price level. Bitcoin plunged to the $19,900 price mark which caused sellers to become active in the market. A fall below the $1,400 level will cause the Ethereum price to rest at the $1,367 level. Broader market support and buying strength will be needed in order for the altcoin to break its bearish thesis. Ethereum Price Analysis: Four-Hour Chart ETH was trading for $1,470 at the time of writing. The altcoin had tried recovering on its chart and the current price movement could be a correction. The selling pressure strengthened after Etheruem price fell below $1,500. The immediate support level for the coin stood at $1,400. If Ethereum remains above the $1,400 level, further losses could be prevented however, the coin will still not be out of the woods. Until Ethereum price moves above the price ceiling of $1,500, bearish price action will remain on the chart. The amount of ETH traded declined which indicates increased selling strength. Technical Analysis ETH was oversold on the four-hour chart. Bitcoin’s sudden excessive sell-off had caused buyers to lose confidence in the asset and major altcoins followed the same path. The Relative Strength Index was below the 20-mark and this signified oversold conditions for the coin. Ethereum price was below the 20-SMA line and that meant sellers were driving the price momentum in the market. Related Reading: TA- Binance Coin (BNB) Loses $300 Key Support, Are Bears Taking Over? The altcoin’s selling strength increased over the last 24 hours. The coin was oversold and other technical indicators also depicted sell signal. Moving Average Convergence Divergence displays price momentum and also the chances of a reversal. MACD underwent a bearish crossover and formed red histograms under the half-line which are sell signal for the coin. Bollinger Bands indicate price volatility and fluctuations. The gap between the bands increased at press time pointing towards increased chances of price volatility. For the coin to see signs of respite over the next trading sessions, it has to move above the immediate price ceiling. Related Reading: Cardano Price At $0.44 With Strong Support, What’s Next? Featured Image From UnSplash , Charts From TradingView.com
Binance Coin (COIN:BNBUSD)
Gráfica de Acción Histórica
De Nov 2022 a Dic 2022 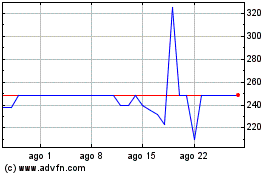 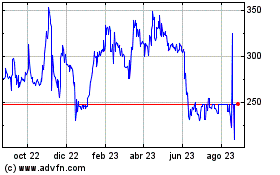 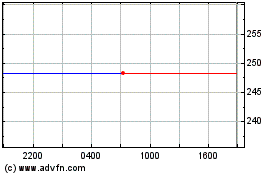