172.92
1.09 (0.63%)
Tiempo Real
Mercado Abierto
172.92
Cardano (ADA) Is One Of The Worst Performing Crypto In Terms Of Profit
22 Abril 2022 - 06:00PM
NEWSBTC
Cardano (ADA) has made it on the list as one of the worst-performing assets when it comes to profitability. The ability to make a profit from a digital asset is what drives the majority of investments when putting money in the asset. However, for some, this has not been the case given that their assets have been performing badly in the market. Cardano is one of those that have put the majority of its investors in the red after consistent dips. 82% In Loss Data shows that Cardano investors are having some of the worst luck in the space. The digital asset which had hit a peak of $3 last year has had a hard time maintaining its value. It has since crumbled back below $1 numerous times, touching yearly lows. In turn, this has caused investors to watch the value of their investments plummet putting the majority of holders in the loss territory. Related Reading | Monero Soars 50% As Crypto Market Weakens, What’s Behind the Rally? While the entire market has had a bad run of it following the bull rallies of last year, Cardano seems to have taken the hit harder than any other digital asset. The price of the cryptocurrency is down more than 60% from its all-time high. What this has meant is that 82% of all investors are losing money at current prices. 82% of ADA holders in loss | Source: IntoTheBlock Now, the investors who have held the tokens for longer are having a better run of it but they only make up a small percentage of the holder base. The majority of these holders have only been in the digital asset for 1-12 months, putting most of the midterm holders at loss.  ADA price trading below $1 | Source: ADAUSD on TradingView.com The percentage of Cardano investors who are making profits at current prices is only 13%. The other 5% are sitting in the neutral territory, meaning that they invested in the cryptocurrency at the current prices. Given that 12% of investors are those who have held their tokens for a year or more, it is safe to say that longer-term holders are winning. Giving more proof to the fact that holding for the long term seems to be the best course of action with cryptocurrencies. Cardano Vs Top Coins Compared to the other top assets though, ADA holders are doing far worse when looking at the percentage of holders in profit. However, taking a look at the holder composition by time held shows a similar trend for profit. Related Reading | Why A “Boring” Bitcoin Could Be A Good Thing For bitcoin, holders in profit are 53% but when you take a look at the time held, 58% of all BTC holders have held for more than 1 year, putting them in profit. The second-largest cryptocurrency by market cap, Ethereum, slightly deviates from this but still shows a larger holder composition by time held. 59% of all investors have held for more than 1 year while 72% of investors are in profit. What this shows for Cardano is that the asset still has a relatively young base of investors. Given that majority of these investors had come in when the digital asset was in a bull market, it stands to reason that it would see the largest portion of investors in loss now that the market is headed into what looks like another bear market.  Featured image from Forbes, chart from TradingView.com
Monero (COIN:XMRUSD)
Gráfica de Acción Histórica
De Ene 2023 a Feb 2023 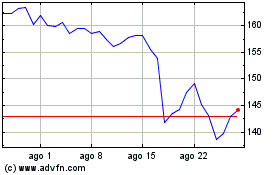 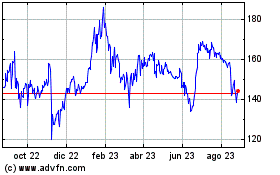 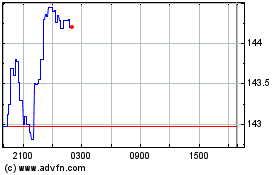