0.3329
0.0037 (1.12%)
Tiempo Real
Mercado Abierto
0.3329
Crypto Roundup: October 4, 2021
04 Octubre 2021 - 01:16PM
NEWSBTC
Bitcoin has started October with a bang, exploding towards $50K in hope of a long-awaited ETF approval. The leading crypto added 10% in just a few hours on Friday, as traders cheered for “Uptober” and celebrated the support of some of the loudest regulatory voices. Securities and Exchange Commission (SEC) chairman Gary Gensler renewed his backing for a Bitcoin Futures ETF on Wednesday, and Fed chair Jerome Powell said on Thursday that the central bank has no plans to ban cryptoassets. Meanwhile, Tezos hit all-time highs above $9 on NFT mania, and Algorand, Chainlink, and Enjin made double-digit gains. Compound, however, bucked the trend by dropping 7% after the protocol mistakenly gave out more than $90 million to users. This Week’s Highlights Bitcoin swings higher as Gensler affirms ETF support Visa positions for a multi-chain future Bitcoin swings higher as Gensler affirms ETF support Across the crypto market, prices have been rising in anticipation that a Bitcoin ETF could finally be given the regulatory green light. In remarks for the Financial Times on Thursday, SEC chairman Gary Gensler renewed his support for a Bitcoin ETF backed by future contracts, suggesting that some of the ETF applications set to be considered in the coming month could be approved. The long-awaited ETF will allow investors to get exposure to Bitcoin using a standard brokerage account without having to buy the underlying asset. Analysts have argued that this will lead to a major price upswing, perhaps reflecting the astronomical gains in gold seen since the approval of the first gold-backed ETF. Visa positions for a multi-chain future  As funds flow into different blockchains across the digital asset ecosystem, Visa is looking to get ahead of the curve. The payments giant has outlined its vision for a “Universal Payment Channel” (UPC), that will serve as a “network of blockchain networks” — connecting different digital assets such as stablecoins with future central bank digital currencies. If previous efforts are anything to go by, Visa’s efforts to incorporate crypto could meet with success. In March, the company started allowing users to settle USDC payments directly on Ethereum, and more recently showed its commitment to the ecosystem by purchasing a CryptoPunk NFT. Week ahead The bullish price action over the last few days has pushed the crypto sentiment index right back to neutral after the fear of September. This reflects growing optimism about the macroeconomic storm brewing for Bitcoin, driven by persistent inflation concerns and calls for a trillion dollar coin to be minted as debate over the debt ceiling drags on. In fact, many traders are now anticipating that the possibility of the dysfunctional US government defaulting on their debt could cause a repeat of 2011, with Bitcoin replacing gold as a hedge against the uncertainty.   Image by Estelle_ from Pixabay
Algorand (COIN:ALGOUSD)
Gráfica de Acción Histórica
De May 2022 a Jun 2022 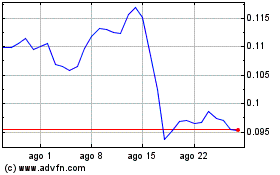 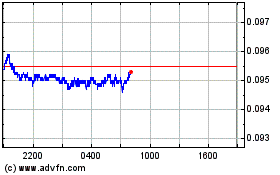