0.06068
0.00036 (0.60%)
Tiempo Real
Mercado Abierto
0.06068
Avalanche Grinds To A Halt As AVAX Breaks 2-Month Uptrend
18 Agosto 2022 - 08:38AM
NEWSBTC
Avalanche (AVAX) price breaches an uptrend lingering in the ascending parallel channel for two months now.         AVAX price dips below the ascending channel, breaching an uptrend for two months         Avalanche price slides further down to $25         Price tagged in the buy zone but lacks impetus to maintain the ascending parallel channel Even though AVAX was able to break above $30, the coin wasn’t able to fill in the cracks to $40. At first, support seen at $28 controlled the bears’ grasp on the price but AVAX price retraced at $26.22 and is in danger of plunging further down to $25 and $21. Related Reading: Dogecoin Jumps 15% In 24 Hours As DOGE Overcomes Critical Level Avalanche Price Slides Down To $25 According to CoinMarketCap, AVAX price has nosedived by 5.53% or trading at $25.89 as of this writing. AVAX faced hurdles as it muscles out with resistance spotted at $30. Bulls tried to sustain the upswing but the intense buying and selling pressure worked against AVAX. Inevitably so, the Parabolic SAR that hovers above the price heeled the scales towards the bears. With the support at $28 breached, the focus will now be reverted to the levels $25 and $21 which shores up the 100-day SMA. Now, trading below this level, the 50-day SMA could impel the AVAX price heading to buyer congestion seen at $21. As seen on the daily chart, the Stochastic oscillator beefs up traction to its downbeat standpoint as AVAX markedly dives under the midline. The continuous retreat of Avalanche price may not be interrupted due to a bearish divergence brought about by the Stochastic oscillator. Strong Sell Signal Seen On 4-Hour Chart The Super Trend indicators currently show an active sell signal depicted on the four-hour chart. Now, the sell signal may dim the probability of an AVAX recovery. The index shrouds the chart to look like a moving average but uses the ATR to measure volatility. As of press time, AVAX will continue to delve into the downhill range with the Super Trend indicator spotted above the price. Supposing the technical factors work against the AVAX price, many investors are confident that this is the best time to jump in. As seen on the daily chart, the readings spotted above the mean line indicate that Avalanche is magnified in value which hoists the possibility of pulling back as investors thrust into profiteering activities. On the other hand, any movement below that range would indicate underestimating the value of AVAX which signals that it’s the best time to buy. Related Reading: Polygon Seen Breaching $1 This Week – Can MATIC Start An Uptrend? AVAX total market cap at $7.38 billion on the daily chart | Source: TradingView.com Featured image from Al Bawaba, Chart from TradingView.com
Dogecoin (COIN:DOGEUSD)
Gráfica de Acción Histórica
De Sep 2022 a Oct 2022 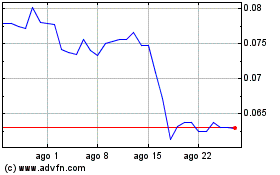 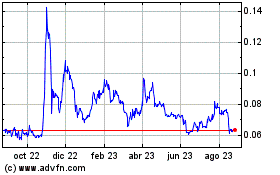 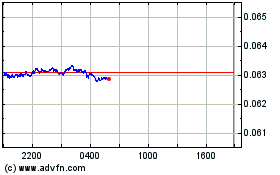